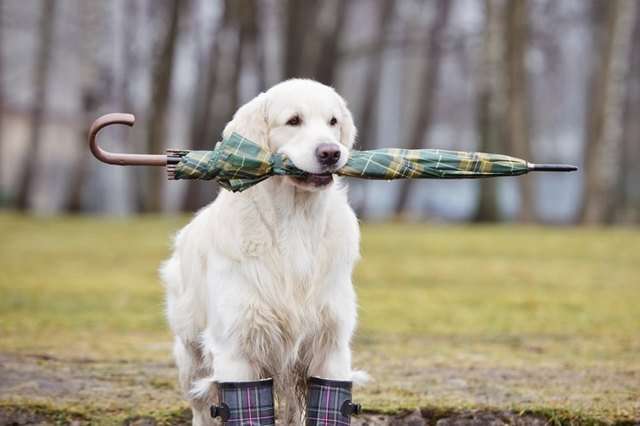 Can Weather Affect a Dog’s Behavior

Wind, thunder, heat, gray skies–these can all affect Doggie’s behavior and mood. However, like people, dogs can have their own unique quirks when it comes to reacting to weather. Some dogs are particularly scared of thunder, while others ignore it. Some dogs don’t mind the dark winter months while others can appear depressed and lethargic. The same is true of other weather phenomena — it just depends on the dog and how sensitive he is.

If you have a dog who’s scared of thunder, you already know how storms can affect canine behavior. Signs of phobia include panting, whimpering or barking, and hiding. According to a study conducted by Penn State University researchers, some dogs experience a rapid increase of cortisol — the stress hormone — during thunderstorms. In fact, when researchers tested the saliva of thunder-phobic dogs, they found their production of cortisol to be 200 percent higher than that of dogs who aren’t afraid of thunder. According to the same researchers, 15 percent to 30 percent of dogs are extremely scared of thunder.

Changes in barometric pressure can affect dogs’ behavior significantly, according to the American Animal Hospital Association. Yours might become agitated — if he’s afraid of wind or storms — or he might become overexcited and curious, ready to pick up scents in the air and go exploring. If you’ve ever seen your dog sniffing the air as a storm approaches, he might be monitioring incoming weather change. As pressure in the air gets lower, the way odors travel changes. Your dog can notice these changes even if you can’t.

Dogs, more perceptive to changes in the weather than we are, can feel changes in the static electric field that occur in the air, especially as a strong storm approaches. That’s why dogs might be able to “guess” a tornado or major storm is coming. According to the SPCA, some dogs jump into a bathtub when they sense a change in air static. Although experts are not sure why dogs do it — it could be a search for comfort or safety — it is a common behavior as electrical storms approach.

Stormy and extreme weather aren’t all that can affect your dog’s behavior — hot weather can affect Doggie’s behavior. For example, some dogs eat less and become less active when it’s very hot. They prefer to lie down on cool tile or near a source of airflow. Some dogs, just like people, become cranky and unwilling to go for walks or to do any exercise when the temperature is high.

Sometimes referred to as the “Winter Blues” Seasonal Affective Disorder (SAD) is a form of depression which occurs usually in the winter months when sunshine is scarce and daytime light levels are low. In humans, SAD symptoms include listlessness, depression, lack of interest in social activities, and fatigue. But, do dogs suffer from Seasonal Affective Disorder? Some research supports the notion that they do. The PDSA (The People’s Dispensary for Sick Animals) found that about 40% of dog parents noticed a significant change in their pet’s moods during dark winter months. The dogs were also reported to have slept longer and their general activities levels were lower than during sunny months. Researches believe that that the cause for these changes lies in the effect that light has on melatonin–a hormone that helps regulate sleep cycles. Melatonin has a number of effects and the major ones include causing a person to relax and get sleepy and lethargic. The pineal gland produces and secretes melatonin in darkness—and stops when light hits the retina. So, during the winter more melatonin is produced which probably causes the classic SAD symptoms in both humans and canines.