Doberman Pinschers commonly develop DCM. Unfortunately, this breed tends to have the worst version of this condition. Dobermans with DCM are at a relatively high risk for sudden cardiac death, and commonly develop progressive congestive heart failure. Very few of these dogs survive 7 months after going into congestive heart failure. Dobermans in atrial fibrillation have an even worse survival time.

Boxer dogs have a different form of DCM. These dogs have changes in the heart muscle where the normal tissue is infiltrated with fatty scar tissue, commonly affecting the right side of the heart, resulting in characteristic ventricular arrhythmias. This disease is commonly referred to as arrhythmogenic right ventricular cardiomyopathy (ARVC), and a specific gene defect has been identified in affected Boxers. Boxers with heart disease may have no symptoms whatsoever and yet have arrhythmias. Some Boxers have fainting episodes (syncope) and collapse from their arrhythmias, and may benefit from antiarrhythmic medication. Other Boxers develop overt DCM and congestive heart failure. Most Boxers can live for around a year on lifelong medication if they develop congestive heart failure. Boxers with ventricular arrhythmias are generally at increased risk for sudden death.

Other breeds such as Great Danes, Mastiffs, Irish Wolfhounds and Labrador Retrievers may also develop DCM. These breeds have variable survival times with congestive heart failure. Many giant breed dogs may develop atrial fibrillation, an arrhythmia that may precede the development of DCM.
If a patient has symptoms that are suspicious of congestive heart failure, such as excessive coughing, difficult or labored breathing, or fainting (syncope), they should be evaluated by a veterinarian. Chest x-rays can help document gross enlargement of the heart, and also be used to check for congestion or fluid in the lungs (pulmonary edema) or in the chest cavity (pleural effusion) from congestive heart failure. Echocardiography (ultrasound of the heart) can be used to document heart chamber enlargement and poor muscle pump function associated with DCM. Electrocardiography (EKG, ECG) is used to diagnose arrhythmias (abnormal heart beats). Holter monitoring (24 hour ambulatory EKG) may be used to help diagnose arrhythmias that are very intermittent. 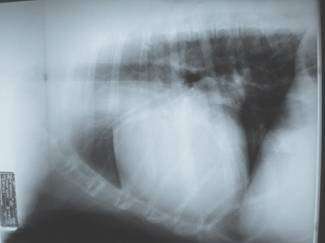 In some cases, DCM may be the result of dietary deficiency or toxicity. Dogs may rarely develop DCM secondary to dietary taurine deficiency. Taurine is an amino acid that is obtained in the diet. If deficiency occurs, most commonly the dog is being fed an all-vegetable or vegan type of diet. Importantly, patients with this form of DCM may have reversible disease, responding to a diet change and supplementation with taurine. Cats rarely have DCM. In the 80’s it was discovered that cats with taurine deficiency have a high incidence of dilated cardiomyopathy. Nowadays DCM is uncommonly diagnosed, and is generally considered to be idiopathic (or unknown) in origin in cats. It is generally assumed these individuals have a specific genetic defect resulting in DCM. 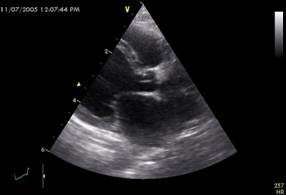 Patients that are symptomatic for DCM and congestive heart failure require lifelong medication. Generally, these patients require diuretics, medication for blood pressure as well as for improving heart muscle pump function. Patients at high risk for heart failure may benefit from medication for blood pressure. Patients symptomatic for arrhythmias may improve on antiarrhythmics. Consultation with a veterinary cardiologist is advised for such patients.